IT, Networking, Mobile, Camera, Gadgets… Everything that Excites Techies :) 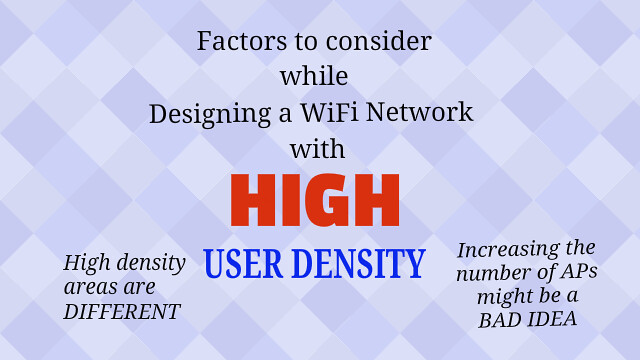 You may think that for high density deployments, it’s best to increase the number of Access Points in order to cater to more WiFi users who are congregated within a small area. But that may not always be the best thing to do. Wireless interference is a major issue, all the more pronounced with high density WiFi deployments.

Even if more APs need to be used, administrators may try to reduce the transmitted power of each AP so that their signals don’t interfere with neighboring APs. But that reduces the available bandwidth for intended users. Hence planning WiFi coverage for high density areas is complex.

Here are some factors to consider while designing WiFi networks in areas with high user density:

You could stay up to date on Computer Networking/IT by subscribing to this blog with your email address that says, ‘Get email updates when new articles are published’.